A few weeks ago I wrote about my 3 x great grandfather Frederick French (1810 – 1887) and expressed uncertainty about the identity of his wife Sarah. This week I received an email from Annette Sutton nee Goodwin in Queensland, Australia, who believes that Sarah was the sister of one of her ancestors, George Frederick Goodwin alias Bull.

Annette has found the record of a marriage between Frederick French and Sarah Elizabeth Bull on 10th July 1853 at All Saints’ church, Poplar. At first, the date of the wedding might raise doubts: in the 1841 census, Frederick and Sarah were already living together as husband and wife and had three children: Sarah (born in 1832), Seth (1834) and William (1839).  I wonder if this explains why I’ve had no luck finding christening records for the French children?

However, the other details in the marriage record are fairly convincing. Frederick is described as a shoemaker, living at 9 Mary Street, Limehouse – the same road where ‘my’ Frederick would be living with his daughter Sarah’s family twenty years later, and not far from the Rhodeswell Road area where the family would eventually settle. Sarah, who is said to be living at 14 Mary Street (were the separate addresses a fiction to make it appear the couple weren’t actually living together?), is described as the daughter of John Bull, a cooper. The name of Frederick’s father is given as William French, another shoemaker.  So as well as clearing up the mystery of my 3 x great grandmother’s maiden name,  this record has also provided me with the name of my 4 x great grandfather.

Further confirmation is provided by the fact that Sarah Elizabeth Bull, who was born on 9th November 1813, was baptised on 10th April 1814 at St. John, Horsleydown, Surrey – the district given as Sarah French’s birthplace in later census records. (Horsleydown is described by one source as ‘a small patch of dirty lanes and dilapidated rooming houses’.)

Sarah’s mother was another Sarah (possible maiden name Jobber) and she and John Bull had eight children in all: John William, William, Henry, Charles, Sarah Elizabeth, Seth, George Frederick and Caroline. (Four of these names – Seth, William, Charles and Caroline – would be given to their own children by Frederick and Sarah French, though of course William was probably named after Frederick’s own father). 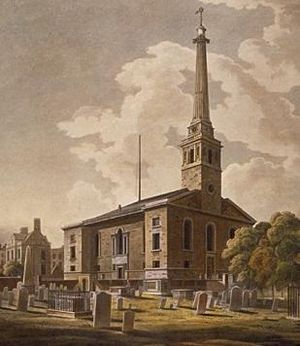 According to Annette Sutton, the Bulls moved across the river to Whitechapel in 1814 or 1814 (soon after Sarah Elizabeth’s birth), where they lived in Gower’s Walk. At the time of the 1841 census, John Bull had died (probably in 1833) and his widow Sarah was living with their daughter Caroline, now married to Thomas Curtis, in Church Street, Stepney. Sarah Bull appears to have died in 1843. Another clue provided by Annette is that, in the 1861 census, Thomas and Caroline Curtis had a visitor at their home in North Street, Romford: one Susan French, almost certainly Caroline’s niece, the daughter of Frederick and Sarah.

Annette is a direct descendant of Sarah Elizabeth Bull’s brother George Frederick, who used the surnames Bull and Goodwin interchangeably, and who was transported to Australia for the trivial offence of stealing a handkerchief. Here’s an extract from the record of his trial at the Old Bailey in 1837:

GEORGE GOODWIN, alias Bull, was indicted for stealing, on the 26th of November 1 handkerchief, value 2s., the goods of James Hunter, from his person.

JAMES HUNTER . About four o’clock in the afternoon of the 26th of November I was in the Commercial-road, and observed the prisoner and another walk as close after me as they could—I looked over my shoulder, and saw the prisoner and another walking fast—I then walked slowly till we came to Albion-street, where they turned down—I felt, and my hand kerchief was gone—I called the police, and pursued them—they parted—the prisoner was taken—one of them threw something into a passage of a door, but my handkerchief has not been found.

WILLIAM CLAY (police-constable K 278.) I was called about four o’clock—the prosecutor said, “I have lost my handkerchief, come with me”—the prisoner and another saw me coming, and the other one got into a house about six doors down Albion-street—the prisoner attempted to go in, and chucked in a dark handkerchief, and when I came opposite the door it was shut—I pursued the prisoner, and he ran me down Albion street, till he came to a court in Duke-street—I then caught him, and brought him back—I found one handkerchief on his person, which I produce—I asked the gentleman if it was his—he said, “No “—this is a silk handkerchief—the house he threw the handkerchief into is a bad house—the girl he cohabits with lives there.

Prisoner. I was sent on an errand for my mother, and was standing at this house—the policeman came and took me—I never had any handkerchief but this, which is my mother’s.

Now that I know the name of my 4 x great grandfather in the French line, I’m keen to know whether William moved with his family from Dorset (census records tell us Frederick was born in Dorchester), or whether his son Frederick made his own way to London. Googling ‘French’ ‘Dorset’ and ‘shoemaker’  I came across this record, and wondered whether there was any connection between my ancestors and this apparently renowned family of Dorset shoemakers. Here’s an intriguing extract:

Francis French began his apprenticeship with shoemaker Richard Wareham at Dudsbury, Parish of Hampreston in Dorset, and in 1803 began their business from a house in Kingsland Place, Southampton. After several moves, they rented at Four Posts in 1883, which at the time was considered to be a long way from the center of the city. By 1825 the family were back living in Southampton and in 1832 a final move to Charlotte Place until Francis’ death in 1836/37. One of his sons, William, at the age of 24, carried on the successful business working from several other addresses such as Hanover Buildings near Paradise Row, Above Bar and in 1848 to Manchester Street, before the French family finally purchased 40 Bedford Place in 1890.

My Auntie Grace relates that her grandmother, Mary French, used to tell her that her ancestors were French smugglers who settled in England and changed their name from something like ‘De’rench’ to French. It seems the reality might be more prosaic – but just as interesting.

My other history websites

My other history websites